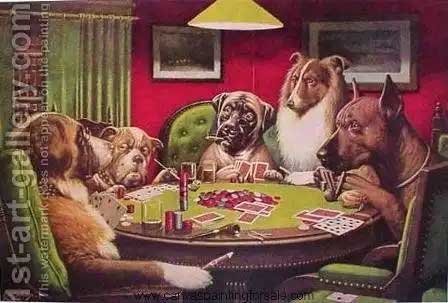 Dogs have been man’s best friend for centuries, so it’s no surprise that so many of the world’s famous artists have depicted them in their work.

Whether they were portraying beloved pets or stray dogs, these masterpieces capture all of the unconditional love and friendship that dogs give to humans, making them truly iconic depictions of canines.

It’s safe to say that dogs have made a significant impact on society. Not only are they adored by people from all walks of life, but they’ve also made their way into literature and paintings. Of the many dog paintings that have been created over the centuries, here are the most famous ones that will definitely catch your eye!

This painting shows four dogs playing a serious game of poker around a table while one dog looks on. The work was created by Cassius Marcellus Coolidge, an American painter, and cartoonist is known for his humorous illustrations of animals. His style is unique, as he painted many different animals doing human activities like fishing, hunting, and playing baseball or golf.

Dogs Playing Poker became one of his most popular works when it was published in 1903 and has been recreated in various forms since then. The title suggests that these are dogs with human-like attributes as they partake in human activities such as smoking and drinking. While the dogs’ cards and facial expressions show the intensity of their game, the pooches also share cigars and drink from glasses of beer on the table.

The Dog by Francisco Goya

Francisco Goya is perhaps most famous for his painting Saturn Devouring His Son, but did you know that he painted more than a dozen works featuring dogs? He loved to paint hunting scenes, and his dogs were frequently portrayed in these paintings.

Goya’s exercise in painting with a limited palette of brown, black, and white expresses the complex attitude toward his pet. The dog is so perfectly rendered that he seems to be specific and real, yet he cannot seem to move or see because of the severely limited colors used to paint him. This is true of all the dogs painted in this series, a testament to Goya’s skill as a draftsman and painter.

At a glance, this painting of a dog might not seem like much, but upon closer inspection, you can see that it’s more than just an ordinary dog. The first thing to note is the way the dark gray face pops out from the rest of the painting: not only because light appears to be shining on it from above, but also thanks to its sharp contrast with the brown background.

Pablo Picasso loved dogs so much that they became frequent subjects of his works. One of his most famous dog paintings, Dog, demonstrates his style with animals, which was influenced by cave paintings and abstract art.

Although it’s not certain what breed is depicted in Dog, many believe it may be Picasso’s longtime Dachshund breed dog, affectionately named Lump. This piece of artwork adorably shows the Dachshund mid-stride, giving it an air of movement that Picasso is so famous for capturing.”

There’s no denying that Dog is an amazing example of Spanish cubism at its finest. The work of Spanish artist, Pablo Picasso, captures the imagination and has transcended generations. Picasso said this dog was one he loved dearly and called it a dream of a creature. No wonder, this simple sketch is one of Picasso’s most famous works regarding animals.

Head of A Dog by Edvard Munch

Edvard Munch, one of Norway’s most famous artists, is best known for his painting The Scream. The artist is also known for creating another piece– Head of A Dog, the head of one of his beloved dogs, but little else is known about the dog itself. The painting was created during a time when Munch was dealing with great loss, and dogs kept him company during his bereavement.

The masterpiece portrays a dog wearing an expression that seems to suggest discomfort or perhaps melancholy. The dog, what appears to be a German Shepherd, gazes directly out of the canvas at us, as if trying to piece together some long-lost memory.

While dogs were often seen as companion animals in Munch’s time, he also saw them as an inspiration for emotional expression. Out of all the paintings of dogs, Head Of A Dog became one of his most notable works.

Dogs In A Boat by Winslow Homer

Winslow Homer (1836-1910) was an American landscape painter, who is known for his paintings of dogs. The iconic Dogs in a Boat painting depicts a peaceful scene of tranquil water with leaves changing colors as hunting dogs spending a quiet moment in their boat between hunts.

The brilliant orange and yellow leaves in the background lend themselves to the theme of autumn. This intriguing work captures well this artist’s unique and colorful style. He was lauded for his ability to convey calmness and emotion through seemingly simple subjects such as fisherman, boats, and dogs. Dogs in a Boat exemplifies this trait.

The reproduction of Dogs in a Boat is an excellent way to bring nature into your home. And if you are looking for a product that will showcase your love of animals, especially dogs and nature, then you cannot go wrong with Dogs in a Boat by Winslow Homer.

A dog is man’s best friend, but it’s also a powerful icon. In art, dogs have long been used to make social and political statements as well as show loyalty, bravery, and strength. A great many of these paintings are so famous that they are in collections around the world and have influenced countless artists throughout history. But you can always treat yourself with one of these artworks from the 1st Art Gallery.