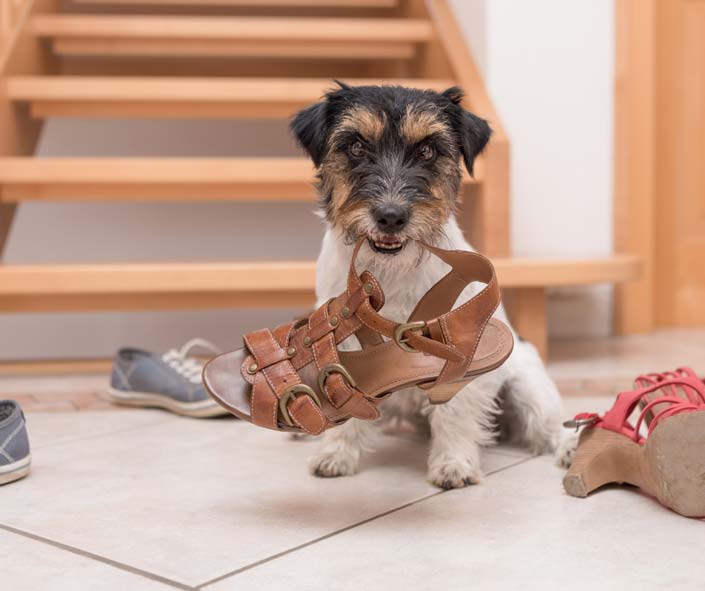 First of all, let me say that I don’t like it when people use the term “chew toy” for an object that is appropriate to chew on only sometimes. A chew toy isn’t something you give your dog to chew whenever he or she feels like it; rather, it’s something you offer him or her at certain times and in specific ways so that he or she will learn to chew on it instead of on your slippers, the legs of the sofa, or whatever else you value.

In Cesar’s Words: “The only thing that a dog needs to chew is a collection of sturdy chew toys.”

If you do not have a collection of sturdy chew toys for your dog, then you should plan to invest in some as soon as possible – and the initial investment will definitely be involved. But there are ways you can make this initial investment more effective – and cheaper – by doing things like buying used toys from sites such as Craigslist or at yard sales or raiding friends’ and family members’ homes for their cast-offs. And if you’re truly pressed for cash, there’s always the old standby: Milk bones! Many dogs are quite content to chew on these for their entire lives.

The key thing, though, is that you have a large enough collection of sturdy chew toys so that your dog has several options to choose from at any one time, and he or she always has something wonderful to look forward to.

The one and the only solution are to get your dog some REAL dog chew toys. No more shoes, slippers, remotes, pillows or furniture legs, bathroom pipes, etc. Get him some sturdy rubber best indestructible dog toys (like the ones found here ) like Kongs, Jolly Balls, Nylabones, Biscuit Balls, Black Hole Balls, and many other safe chew toys! This way he will learn what he can and cannot chew on.

So, the question is: How do you teach your dog to stop chewing everything?

First of all, remember that dogs are pack animals and like all pack animals they need a leader (a “boss”). It’s up to you to be this leader so your dog knows what he or she can chew on and what isn’t appropriate as a chew toy. This means taking stock of exactly what it is that gets chewed up in your home, and how long it takes for the items to be destroyed after being left out with no one watching them.

In addition, dogs will often chew on whatever they can get their teeth into – particularly when you’re not around. So another thing to keep in mind is whether or not your dog has been left alone long enough to have chewed on something he or she shouldn’t have, or has been left with a “substitute” chew toy that doesn’t belong to him or her.

Once you understand why your dog chews things and what kind of objects he or she focuses on the most, then you can begin working on training him or her to leave these items alone.

Fortunately, most dogs respond very well to positive reinforcement (a favorite treat as a reward) and will quickly learn what they can chew on and what is off-limits if you follow the tips below.

There are also products like bitter apple spray and bitter lime that you can purchase off the internet. So if you want to train your dog to stop chewing on things try these steps and hopefully, he or she will learn quickly!